Big Bang Disruption: Kick your Competitor to the Curb 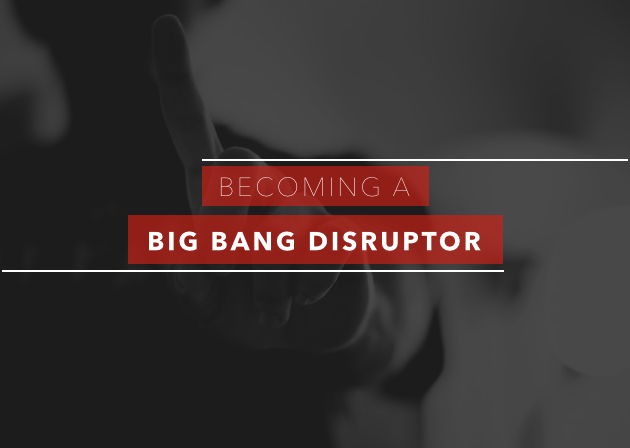 If you are looking to succeed as a business, an interesting book to read would be the Big Bang Disruption: Strategy in an Age of Devastating Innovation  by Larry Downes and Paul Nunes. The basic premise of the book is that today’s new technologies and products are so much better and cheaper than their legacy counterparts that they literally wipe the latter out overnight. This means that startup businesses and their owners can become sensations and mature companies in just a short period of time.

In the book, the authors also suggest that entrepreneurs need to be forward thinkers, meaning they must have a long term vision that will prepare them for overnight success or for a sell out if overtaken by a revolutionary new product.   In arguing this, Downes and Nunes assert that entrepreneurs should focus their vision on acquisitions rather than in-house developments of new products.

If you are taking an online marketing or social media course or looking for ways to spruce up your business ideas, “Big Bang Disruption” is something that you should always keep in mind. Nunes and Downes are not the only people to believe in the “Big Bang Disruption”. Here are just two examples:

Google’s practices over the years have reflected the theory of “Big Bang Disruption”. In order to squash the competition and to stay afloat in an ultra competitive Information Technology world Google has embarked on a buying spree, purchasing companies like Boston Dynamics, creators of quad and bi-petal robots, Nest, a connected device company, and DeepMind, an artificial intelligence company. Between 2012 and 2014, it has spent $17b just on acquisitions, which is more than its competitors [Apple, Microsoft, Amazon, Facebook and Yahoo] have spent combined.

The exact reason for the acquisitions, which were at one point numbered at one per week, is unknown. It is speculated that Google desires to become more than a search engine.  Tech analyst, Rob Enderele, argues that Google is interested in “internet of things” and desires to establish a network of connected devices in the home, corporate world and elsewhere that use Google Technologies.  George Geis, on the other hand, argues that Google is merging with smaller companies at such a high rate because it’s interested in acquiring the talent behind the companies.

What is clear is that Google is trying to outwit and outplay its competitors and gulp them up before they gulp them down and take them out of business with the innovations. The Nest acquisition in 2014 for $3.2b cash is the perfect example. Not only did Google steal the brand, but hired Nests’ founders Tony Fadell and Matt Rogers to join their team. That’s a smart move considering that Rogers was one of the engineers behind the iPhone at Apple.

Apple has taken a conservative approach to causing disruption for its competitors in the consumer electronics, personal computers and computer software industries. In the past two years, it’s partnered with multiple big brands like IBM, Facebook and Twitter and has focused on providing its users with a more optimal experience.

That’s not to say that they haven’t acquired innovative startups. In 2014 alone, the corporation acquired 9 smaller brands like SnappyLabs, a photography software and Camel Audio, a popular instrument and effect plug-in. So far this year, there have been 9 mergers and acquisitions, including VocallQ, a popular Speech tech firm in the U.K. Click here to view the full list of mergers and acquisitions by Apple.

It would therefore be no shock if Apple decided to acquire Tesla in order to maintain its status as one of the biggest bang disruptors.

Consumer interests are constantly changing and as a digital marketing manager this is the first thing you should always bare in mind. A product that was sold a few decades ago is no longer a product that is being used today; VHS, walkman, and floppy disks are three such examples. If you want to stay afloat, you need to come up with newer ways to maintain consumer interests.

If you don’t think you have the skills and the mindset, simply take a look at Periscope, Facebook and Snapchat and where they were a few years ago in comparison to now.  I am more than positive that the college geeks that came up with these innovations never imagined that the innovations they once created would one day be popular among millions of consumers. But they did and their legacy counterparts [YouTube, MySpace, Windows Messenger] took a big hit as consumers made an exodus.

Whether you are working in the SEO industry or in social media marketing or mobile marketing fields, you, as a digital marketer, need to stay abreast with the latest trends and requirements and consumer interests. Your products and services need to benefit your consumers and somehow make their lifestyles or work pace easier than the last product they purchased. In doing so, you will become a big bang disruptor because you’ve convinced consumers to make the change and buy your product instead of your competitor(s).

Why Google is buying a seemingly crazy collection of companies

0 responses on "Big Bang Disruption: Kick your Competitor to the Curb"

Check out our most recent posts