Social Media 101 from Doug the Pug

Yes, you read that right; marketing lessons from a dog. Don’t worry, we’re not going to tell you how to turn your business into a cute dog that everyone loves. We, however, will take a look at how one of Social Media’s most famous dogs, “Doug the Pug” went from roughly 3000 followers in March 2015, to 1.7 million followers on Instagram and 4.5 million followers on Facebook in 2016.

Rise to Fame on Social Media

In the summer of 2012, Leslie Mosier got her pug and named it Doug. She was working as a New Media Manager at the time. She soon opened an Instagram account and started posting a lot of pictures of Doug. Once the pictures started to gain some attention, Mosier started to add props when taking pictures and also included funny captions. Doug was then featured on major dog accounts on Social Media, which is when Mosier decided to create an Instagram profile just for Doug, as she was still using her personal account at the time. Nothing really happened until Doug was featured on Mashable. Other news outlets such as Buzzfeed and Huffington Post then began to post articles about Doug, and that’s when the account really started to gain attention. Fast-forward to May 2016, Mosier has quit her job and now fully spends her time managing Doug’s “empire”. She posts pictures and videos every day, has collaborations with many brands, travels around North-America with Doug for events, has a merchandise line and will soon be releasing a book. 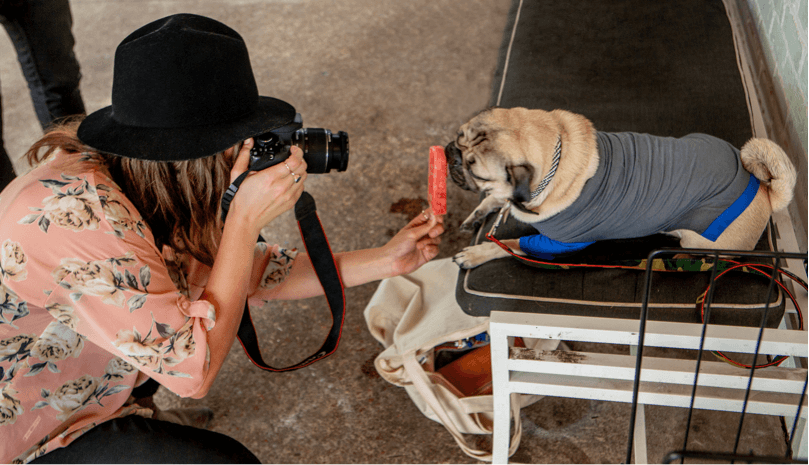 So, What Can we Learn From Doug?

It’s safe to say that Mosier excels at Marketing and Social Media, as she managed to build an empire for her dog and even managed to make a career out of it. We took a look at an interview Mosier did with So Fetch and highlight the most valuable Marketing lessons that can also be applied by businesses.

1. Be Relatable
In order to keep growing on Social Media, it’s important to be relatable to your followers, and keeping them interested in the content you post. Mosier said that with every photo and video she posts of Doug the connection between him and his fans is established and strengthened. “I have to capitalize on their relationship with him in order to grow the business” she said.

2. Have a Community Driven Platform
While not applicable to all businesses; this could be valuable for some. Another way to engage with your followers is to build a sense of community where people interact with each other and share content. This in turn gains more attention for your Social Media platforms. Mosier said “I place a very high regard on his community. By engaging his fans to interact together and share his content, they are then able to share his media with their friends and family. I’ve noticed that “comments” on photos and videos are much more valuable than “likes” in that aspect – when a fan tags their friend on Doug’s content, the reach is much higher, and our following grows.

3. Be Consistent
I think the most valuable Marketing lesson we can learn from Doug is being consistent; Mosier started with nothing, but kept consistently posting even though her follower count wasn’t that big in the beginning. Mosier said “Consistency is, without a doubt, the reason why I’ve been able to grow his accounts to the point where I am now able to sell through it. By consistently posting photos and videos to his accounts each day (I have not missed a single day since September of 2014) he is constantly on everyone’s radar.”

Mosier continues to grow her empire by gaining new followers on all her Social Media channels every day, her book “Doug the Pug: King of Pop Culture” will be released on November 1st. You can follow Mosier and Doug here: www.facebook.com/itsdougthepug

3 responses on "Social Media 101 from Doug the Pug"